Nepal is the birth place of Lord Buddha, the god of peace. He was born in 563 B.C. Since it is the birth place of Lord Buddha, there are many religious heritages related to Buddhism. Shanti Stupa is one of the important Buddhist monuments of Nepal which was built on 27th Bhadra 2030 and was destroyed on 13th Shrawan 2031 and then again rebuilt on 8th Jestha, 2049. It is the Nepal’s first Shanti Stupa and 71st Shanti Stupa of the world.

World peace Pagoda (Bishwo Shanti Stupa) is a massive Buddhist Stupa, it has an immense role to beautify the Pokhara valley. It is located on top of Anada hill of Pumdi Bhumdi Village Development Committee, the Stupa lies approximately 7 kilometers away from Mahendra pool, and the main market of the valley. This Stupa was designed by Monk Nipponzan Myōhōji organisation and founded by Monk Litokowo. The Stupa is situated at an elevation of 2 thousand and 1 hundred meters above sea level. 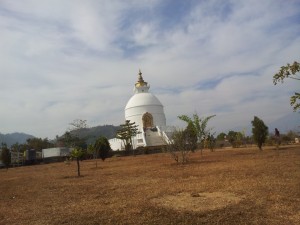 It has already been stated that the Stupa was the sole product of sincere initiative and a design of a Japanese Bhikshu Nipponzan Myōhōji. His proposal of constructing a Stupa at that very place was highly welcomed by Dharmasila Guruma, a buddhist nun of Dharmashila Buddha Bihar of Nadipur, Pokhara and Meen Bahadur Gurung, an ex-minister. The keen desire of the Japanese Bhikshu could be materialized as the land (i.e.Anaau danda) was granted by Meen Bahadur Gurung.

The Peace Pagoda is unique of its type in the Pokhara valley. The Stupa gives a feeling and message of peace and prosperity. Situated on a hill top of Pokhara valley, the Stupa has an immense value and significance from both tourism and religious point of view. From tourism point of view, one who climbs the hill i.e Anada, can enjoy having a glance at the Himalaya range like Machhapuchhre, Dhaulagiri and Annapurna Himalayas and greenery scene, scenery of Pokhara valley and its surroundings. Anada danda itself is an appropriate picnic spot.

This temple is one of the most important Buddhist monuments of our Nepal which has attracted millions of visitors from abroad and has promoted tourism sector of Nepal and contributed in the economy of our country. Transportation up to the Stupa must or can be made better so as to attract more number of tourists towards the temple.  Just like other cultural monuments of Nepal, its surrounding is not so polluted or degraded. This should be maintained sustainably. Nepal is a cultural country thus; there are many cultural heritages here. Because this temple has attracted so many tourists in Nepal and has contributed in the national income of Nepal, it is a valuable asset of our country. Therefore, it must be preserved.