but grew deep aggressiveness and bitterness towards his father. Hitler dropped out of high school without a diploma as a revolt against his father. He did not show any interest on studies rather tried to be a painter.

Famous as: Political Leader and dictator of Germany 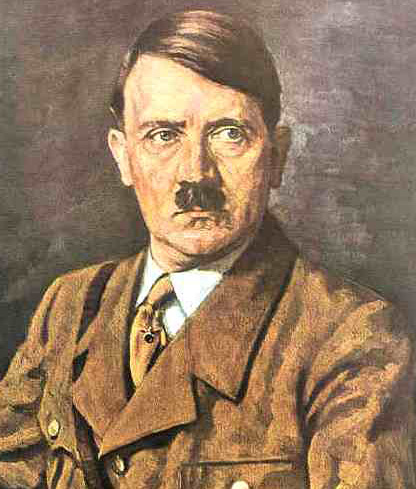 Born in: Braunau am Inn

Hitler lived in Vienna with financial support from an orphan’s house; his mother died of breast cancer at the age of 47. In Vienna, Hitler struggled as a painter even after being rejected twice by the Academy of Fine Arts Vienna. His anti-Semitism (prejudice against Jews) came from having seen an orthodox Jew community in Vienna, a breeding ground of racial and religious prejudice at that time. Hitler held the Jew community responsible for Germany’s collapse and economic problems thereafter. In 1913, Hitler possessed the final part of his father’s estate and migrated to Munich.

After World War-I, Hitler was appointed as a police spy of an Intelligence Commando to infiltrate the German worker’s Party. Here he met its founder Anton Drexler and got impressed with his anti-Jewish socialism and anti-capitalist ideas; Hitler became a member of the party. He was discharged from the Army in 1920 and became an active party member with his highly effective oratory skills and delivered speeches against Marxists, Jews and anti-socialists. In 1921, Hitler was made the chairman of the National Socialists German Worker’s Party. He was arrested and charged with high treason after his attempt to instigate a coup against the government and start a march on Berlin in 1923.

Hitler was sentenced to five years imprisonment at Landsberg Prison in 1924 but was released from jail after receiving a general amnesty. In the prison, he wrote his autobiography ‘My Struggle’ which is related to his ideology. In 1932, Hitler was granted the citizenship of Germany and made eligible for contesting presidential election against Hindenburg. Even though he was defeated, Hitler emerged as a strong alternative in the German politics. After all, Hindenburg agreed to appoint Hitler as the chancellor of Germany, as it was obviously impossible for him to form a government without Nazi’s support. Thus, in 1993, Hitler was declared as Chancellor of Germany. Having gained legislative and executive power, Hitler proceeded towards establishing the Nazi’s dictatorship in Germany. Though Nazi party had failed to gain majority in parliament, he blocked all attempts of his opponents to come into power through elections. Hitler banned Communist Party of Germany along with Social Democratic party and forced all other parties to dissolve. In 1993, Nazi Party was declared the only legal Party in Germany. After the death of President Hindenburg, Hitler was made the supreme commander of the military. He assumed the ultimate power of the nation; the officers took oath to Hitler’s loyalty.

During Hitler’s rule, Germany witnessed the largest expansion of infrastructure and reached the level of near full employment. One of the major policies of Hitler was racial purification. The policy caused deaths of thousands of physically disabled, mentally retarded and ill people, who-in Hitler’s opinion were unworthy of life and a burden to their nation. The Holocaust was seen as the only way out to eliminate the Jews from their land.

Sino-German economic agreements came to an end and deprived the German of raw materials. Hitler forced Austria into amalgamation with Germany and made a victorious entry into Vienna.

Strong in his will and withstanding all his challenges, Hitler ordered his allies to start preparing plans for the invasion of Czechoslovakia, which thereby increased the tension in Europe. The famous May Crisis 1938 in Europe was a terror caused by the rumors that Czechoslovakia would be attacked during the municipal elections there. This invited a warning from London that a German move against Czechoslovakia could be dangerous. The May Crisis backfired resulting in Hitler’s political defeat and thus making him the prey of his own trap. This was enough to make him understand that expansion without attacking Britain was impossible and attacking Britain was a dangerous game that could hit back and create disaster.

After the fall of Poland to Germany and the end of the so called Phoney War in part of north-western Poland, Hitler instructed the two Gauleiters to Germanize the area. After taking-over of Poland, another major clash surfaced between different factions. Expelling the entire Jewish population of Europe into Africa and reducing the remainder of the Polish population to a leaderless laboring class, Hitler went on making Europe into a danger zone. He went on ordering for step to step bombing raids on England. This famously known Battle of Britain began by striking the Royal Air Force bases and radar stations protecting South-East England. Hitler then ordered the bombing of British cities, including London, Plymouth and Coventry, mostly at night.

In 1941, three million German troops attacked the Soviet Union, there by breaking the non-aggression pact that was signed between Hitler and Stalin two years back in 1939. This attack was part of the dreams of the World Conquest that Hitler had formulated in 1920s. This move came as a hope for Winston Churchill because he wanted the Soviet Union to enter the war on the Allied side. Hitler’s declaration of war against the United States in 1941, put him against a noxious union including the world’s largest empire (the British Empire), the world’s greatest industrial and financial power (the United States), and the world’s largest army (the Soviet Union).

In late 1942, German forces were defeated in the second battle of EI Alamein, which strongly hit Hitler’s plans to seize the Suez Canal and thereby the Middle East. Situation became worse with the progress of the Battle of Stalingrad that ended with a destruction of German 16th Army in February 1943. On 6 June 1944, the Western armies landed in northern France, making it one of the largest victories of European army. It was by this time that defeat became inevitable, leading to the end of Hitler’s rule in Germany.

By late 1944, the Red Army had forced the German troops back into Central Europe and the Western Allies continued to progress into Germany. It was then Hitler realized that Germany was doomed. He ordered complete destruction of Germany’s infrastructure’s before it’s captured by the enemies. In April 1945, the Soviet forces attacked the suburbs of Berlin. Hitler disposed his follower’s advice to take the shelter in the mountains of Bavaria rather decided to die in the capital. On 20 April, Hitler celebrated his 56th birthday in the Fuehrer’s shelter without much anguish.

He had married a day before also committed suicide along with him. Their bodies were secretly buried by the German troops before the Red Army captured Berlin on 2 May 1945.