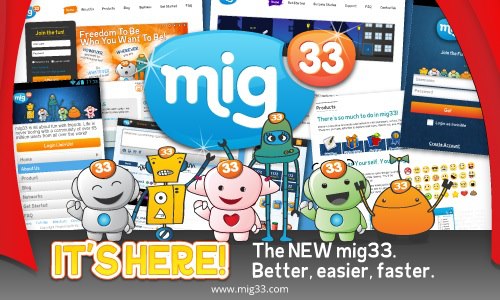 Mig33 is one of the most famous and widely used social networking sites in today’s time. It is used by the people living in most of the countries of the world. It is very much famous in many Asian and African countries like Nepal, India, Bangladesh, South Africa, United Arab Emirates, Singapore, Indonesia, Qatar, Bosnia and Herzegovina, China, Libya, Syria etc. It was launched by a group of enthusiastic internet and computer experts in December, 2005 A.D. It was especially created to enable easy mobile text chatting between the people. But today, it has not only become a means for mobile text chatting but also much more. Currently, Steven Goh is working in the post of the Chief Executive Officer of mig33. He is a co-founder of mig33. His username is crazygrape.

Likewise, sometimes some users may use tools for sending unnecessary texts at a high speed for irritating users in chatrooms. These activities degrade the discipline in the community. In the same way, some users may be needing help at the time of using mig33. So, for the removal or eradication of all these problems, mig33 provides special posts and powers to the users who are using mig33 from a long time and who are actively participating in helping the users in the community. This post is called the post of Global Admin.

The usernames of new Global Admins from India are given below:

The usernames of Global Admins from Indonesia are given below:

These are the users whom mig33 has provided opportunity to work for the community. We would like to congratulate all of them. We would even like to wish a best of luck to them. We hope that they will never disappoint the mig33 users and always work for the welfare of the mig33 community.

A Short Lookup in Apple's iPhone 5