Among all the above mentioned beautiful and religious places of Nepal, Pokhara is one of the most famous cities of Nepal due to its natural beauty. It consists of various places like Phewa Lake, Davi’s Fall, Tal Barahi Temple, Bindabasini Temple, Mahendra Cave, Begnas Tal and many more. Among these different places rich in natural beauty and culture, Tal Barahi Temple is of religious, cultural as well as natural importance where numberless pilgrims of Goddess Barahi come to the temple so as to pay homage to Goddess Barahi and countless visitors or tourists visit the temple due to its architectural beauty and its surrounding full of natural beauty. 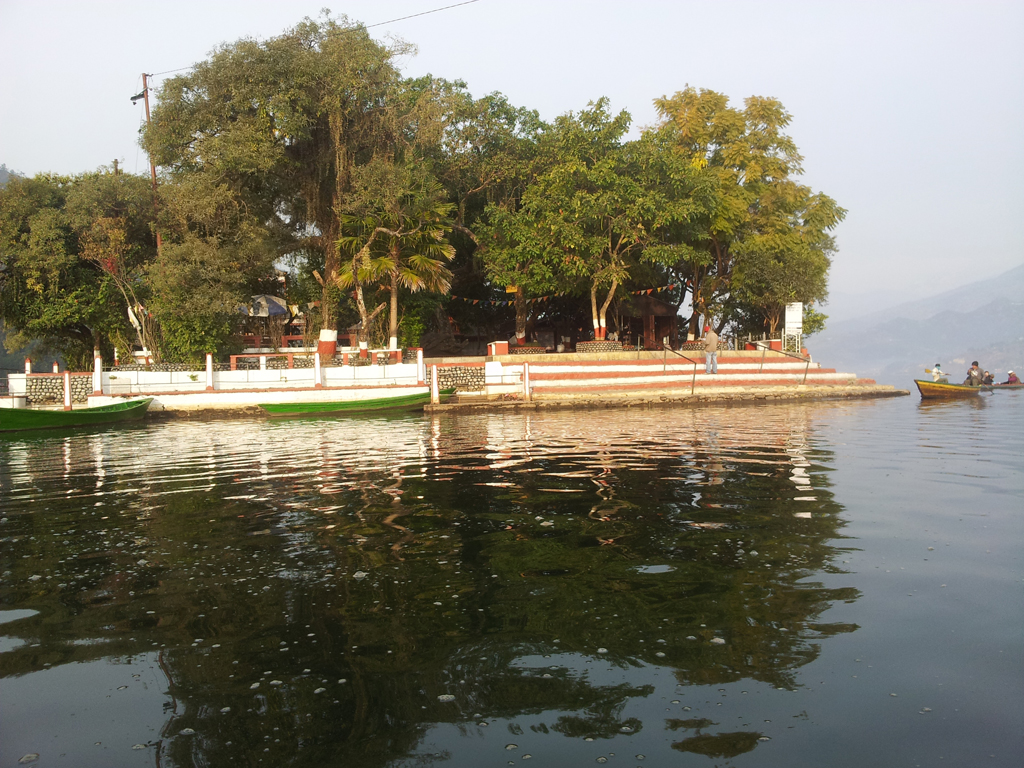 Tal Barahi, one of the essential cultural monuments of Pokhara, is an amazing temple situated almost at the center of the famous, beautiful and second largest lake of Nepal, Lake Phewa. It is the pagoda style, two storied temple which is decorated with magnificent arts works based on Nepali architecture. The roof of the temple is of copper sheets and the Gajur (pinnacle) is made of pittal (brass with gold coated).

Inside the temple, a stone idol of Goddess Barahi is placed who is considered as Protector Deity representing the female force. Barahi is worshipped by Shaivas, Vaishnavas and Shaktas. Barahi is worshipped in the Sapta-Matrikas group (seven mothers). They are venerated in Shaktism and are also associated with Lord Shiva. Barahi is a Ratri Devata (Night Goddess) and is sometimes called Dhruma Barahi (Dark Barahi) and also Dhumavati (Goddess of Darkness). This is the reason that the Goddess Barahi is often worshiped either after sunset or before sunrise. In the context of Tal Barahi Devi, it is said that she is so powerful that those who dishonor the Devi have to face unexpected hardships and troubles in their life. Keeping this reality in mind, King Mahendra has ordered to renovate the temple of Tal Barahi in its original form since he was gestured by the Devi Barahi not to change her original form.

In the context of the origin and establishment of the Tal Barahi temple, there is an amazing legend (traditional story) regarding how the Devi Barahi located on the top of Phewa i.e. Saran came in the middle of the Lake Phewa. At that time, the enormous lake was filled with debris, rubbish which then resulted to the conversion of such a huge lake to a big solid land. Despite of the conversion of the lake into the land the Goddess Barahi gave gesture to King Kulmandan Shah, the then King of Kaski that the Devi had a keen interest to stay in the middle of the lake. Since Kulmandan Shah was the true devotee of Goddess Barahi, he shifted the temple of Barahi from Saran to the centre of the lake. But there is no authentic historic source that can prove this legend true since Devi Barahi has a long history of her existence, through the actual date of establishment of Tal Barahi Temple which is not determined yet.

Daily puja is performed using the puja samagri (dhup, acheta, abir, phulpati etc.), animals such as goat, duck, hen etc. are sacrificed and pigeons are made fly with the view to please Goddess Barahi. Special puja is also performed particularly by the local people under the ward no. 5, 6, 7 and 8 of Pokhara in the months of Baishak and Kartik each year. Making the witness to the Devi, a number of marriage and bratabanda ceremonies are held especially on the auspicious days of the different months from November to July. Pokhrelis, the old inhabitants of Pokhara, still observe a tradition in which they sacrifice a goat to the Devi Barahi in the month of Kartik and dig supari, janai and copper coins outside the temple which is known as Chakra. This Chakra is taken out from the ditch after offering goat to the Devi in the month of Baishak. The main motive of this old tradition is the expectations that it may rain in Baishak and the month would be more productive and from Kartik the rainfall may stop and the weather would be supportive to harvest.

People believes that Devi Tal Barahi is a powerful goddess that makes people free of troubles and hardships. It is believed that if goddess Barahi is made pleased, one can make his/her aim or dream comes true and make his/her life successful. Every year, millions of pilgrims come to this temple to worship Devi Barahi where as millions of tourists from abroad come to this temple to see its architectural beauty. Most of the tourists visit the temple mainly with a view to look into the panoramic Himalayas and hilly areas of the Pokhara valley. The peaceful surrounding or typical structure of the temple attracts everyone towards the temple. 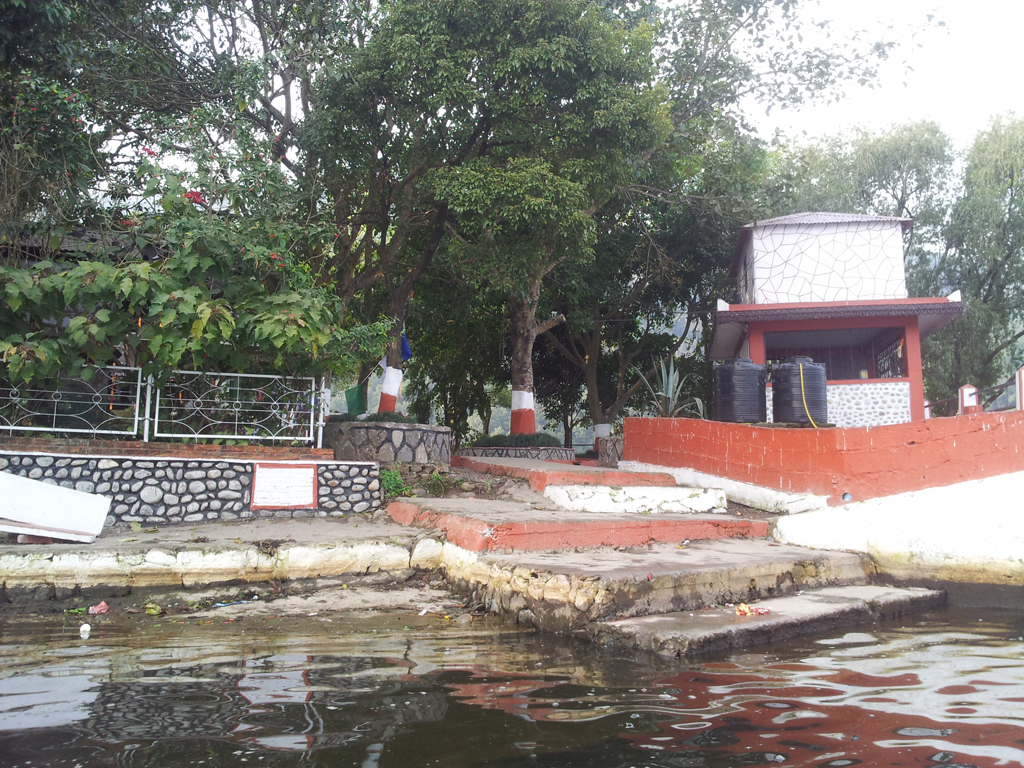 Since the Tal Barahi Temple is located almost in the centre of the famous Lake Phewa, one will never miss to visit this temple once. One needs to ride on a boat so as to reach the temple of Tal Barahi in the Lake Phewa. In the same way, innumerable pilgrims and visitors come to the temple of Tal Barahi; therefore people can sell various handmade and other things to the tourists. In this way, the Tal Barahi Temple also helps in providing employment opportunities to the people of Pokhara and thus in raising their living standard making their life better. There is no doubt in the natural beauty of Phewa Lake but it is also not wrong that the Tal Barahi Temple is the major attraction of this lake which attracts uncountable tourists towards it increasing the lake economy and promoting Nepali culture in the world as well.

We are already familiar with this fact that Tal Barahi is the most important religious as well as cultural monument of Pokhara. This temple promotes the Nepali culture, arts and architecture demonstrating it in front of the world. This temple has also given many benefits to the people of Pokhara. Therefore, we can easily say that the Tal Barahi Temple is of paramount importance and is must to be conserved. But the surrounding of the Tal Barahi i.e. Phewa Lake is being quite polluted nowadays which must be cleaned soon. The major things that are responsible for it are washing of clothes in the lake, recklessness of people towards the cleanliness of the lake and so on. If the activities of the people go on in this way, in few years this famous lake will lose all the name and fame that it has gained at present and will certainly result in the decrement of the number of tourists which will surely impact in the national economy of our country. Not only this, it will also create obstacles in the development and promotion of the culture of Nepal. Resultantly, the development and progress of our Nepal will be hindered by those problems.

In Nepal, there is more probability and potentiality for development in the tourism sector than in any other sectors. But if we, Nepalese stays passive and  activities go on in such a way or degrades the surrounding of our cultural heritage, then there will also be no development or progress in the tourism sector as in others. For our bright future, we all Nepalese should collaborate with each other because no problem has been solved yet by the efforts of a single person. We have deism in our heart but we are not showing it in our behavior actually since we are destroying and polluting the cultural monuments or its surrounding. So let’s try our best to escort the cultural monuments around us from today and popularize Nepali culture and tradition to attract more tourists in Nepal and contribute in the nation’s economy for its development.