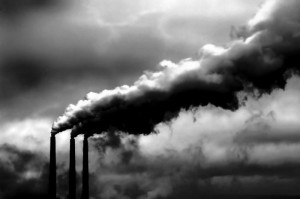 Air pollution can be defined as the occurrence of solid waste or higher concentration of gases other than oxygen which are harmful to human beings as well as other related organisms. It is one of the most considerable and harmful pollutions which are reported from industrial towns, urban areas etc. The cities which are giving rise to high amount of air pollution are New York, Tokyo, London, Mexico City etc. Industrial and power plant establishment and other human activities like use of fire, use of vehicles or automobiles, smoking etc. play a great role in the creation and increment of air pollution.

Sources of Air Pollution
There are different sources from which air pollution arises. Some common sources are listed below:

Major pollutants of air pollution and their effects

There are many substances and factors which are creating and increasing the problem of air pollution in the environment. Some major pollutants and their effects are listed and described below:

1. Carbon dioxide
Carbon dioxide produced from the burning of different kinds of fossil fuels and automobiles have caused a rise in atmospheric carbon dioxide concentration. This rise in concentration prevents more of the sun’s heat energy from escaping from the earth’s surface. This is similar to the behavior of glass in a greenhouse. It results in the rise in the earth’s temperature and is described as greenhouse effect or global warming.

2. Carbon monoxide
The major source of carbon monoxide is the exhaust emissions from vehicles and burning of coal. It is also formed from the smoke of cigarette. This gas combines with Haemoglobin (Hb) about 210 times faster than oxygen which reduces oxygen carrying capacity of Haemoglobin (Hb). It causes anaemia, headache, nausea, difficulty in breathing etc.

3. Sulphur dioxide
Combustion of petroleum product by automobiles and burning fossil fuels are the major sources of sulphur dioxide solution. The sulphur dioxide and water (rain drops) combine to form sulphuric acid. The rain therefore has low pH value which is known as acid rain. It makes the soil acidic and damages the production of crops and plant growth. It also causes irritation of respiratory system and causes diseases like asthma and skin diseases in human beings.

4. Aerosols
Aerosols are the chemicals released by jets or airplanes which contain Chlorofluoro Carbons (CFCs). They cause depletion of ozone layer in stratosphere which is also known as ozone hole. Through this hole, the harmful ultraviolet rays may pass into the earth’s surface. This causes skin cancer in man and affects other animals and plants.

5. Lead
Lead is released into the atmosphere, mainly from automobile exhaust. It causes damage to liver and kidney and induces abnormalities in fertility and pregnancy.

8. Smoke
Smoke is a group of tiny particles of carbon suspended in air released from houses, burning fossil fuels, coal, oil, factories and other particles like soil dust, pollen grains, microbes, mist etc. which cause several allergic reactions to humans. Smoke may cause respiratory problem, damage the epithelial lining of the alveoli. It greatly reduces the light intensity at the ground level which thereby, lower the overall rate of photosynthesis.