This festival is also known as  Bada Dasain, Vijaya Dashami

etc. It is also called as Durga Puja in some parts of India. This festival is not only the longest festival of the Hindus but also the most important and anticipated festival of the Hindus, involving the best staging and visual impact productions equipment. Though this festival is celebrated for fifteen days, the first day, seventh day, eighth day, nineth day and the tenth day are taken as the important days.

During this festival, the manifestations or forms of Hindu Goddess Durga are worshipped with many offerings and sacrifices of different animals like goats, buffaloes, hens, ducks etc. Since this is the greatest festival of Hindus, all the members of the family gather and enjoy with each other. They get new clothes, ornaments, assets etc. in this festival. Mainly boys fly kites during this festival. People also enjoy by playing in swings made up of bamboo. Many people engage in gambling too. In this festival, the juniors get blessings and Tika with Jamara from their seniors. In Nepal, all the government offices, schools, colleges, financial institutions etc. remain closed during this period.

Significance
This festival has a great significance of victory of good over evil powers. This festival commemorates the victory of gods and goddesses over the demons and devils. Once upon a time, a demon named Mahishasura had terrorized heaven and earth. 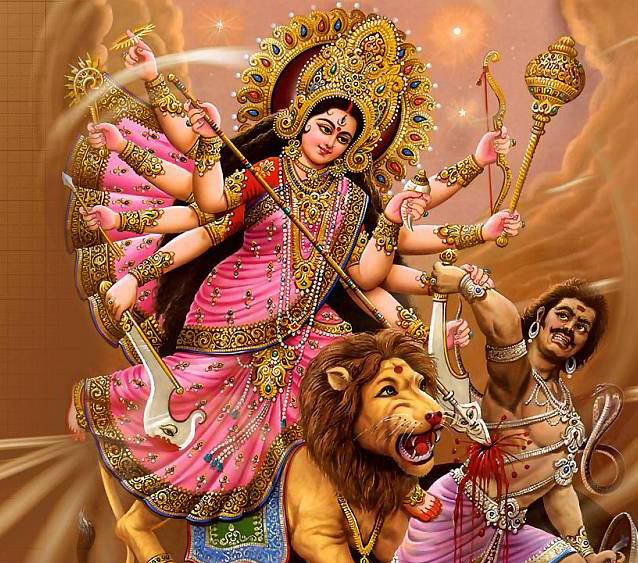 He could switch his body from human form to buffalo, so he was named as Mahishasura which is the combination of two Sanskrit words i.e., ‘Mahisha’ and ‘asura’. Here the word ‘Mahisha’ refers to buffalo and ‘asura’ refers to demon. He had even conquered heaven after defeating the King of Heaven, Lord Indra. So it was very much necessary to defeat and destroy him once and for all. So, all the saints and gods prayed which gave rise to the powerful goddess Durga. After a fierce battle, goddess Durga killed Mahishasura and in this way she stopped the terror in heaven and earth. The first nine days of Dashain resemble the days of battle between Mahishasura and goddess Durga. The tenth day symbolizes the day when goddess Durga got victory over Mahishasura. The Shakta Hindus take this day as the day of victory of goddess Durga over Mahishasura whereas the Non-Shakta Hindus take this day as the day of victory of lord Ram over the demon Ravana. Ram and Ravana are the characters of the epic Hindu story Ramayana. Even the Buddhists commemorate this day as the day when Emperor Ashoka of India abandoned violence and war.

Description
The descriptions of the important days of Dashain are given below:

After the tenth day, the people visit their relatives to receive Tika and Jamara with blessings. They have feasts too which consist of many delicious food items or dishes. After the completion of this festival, the government offices, educational institutions, industries etc. get resumed.

Chromebook: A Creation of Google and Samsung