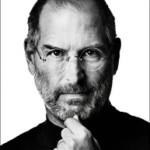 dead till now. They are now in the process of birth. It is said that the IPhone 5 that Apple Inc., U.S.A. is going to launch this year is the creation of Late Steve Jobs.
According to a report, Steve Jobs had already designed IPhone’s fifth edition before his expiry. Though Steve Jobs had told that people didn’t like to own a large screen and bulky device, later he left that thought and brought out the plan to create the fifth version of IPhone.
The report shows that Apple’s IPhone 5 is going to have a larger screen than its previous version IPhone 4S. Current IPhone 4S has screen size of 3.5 inches but the IPhone 5 will have the screen size of 4.0 inches. It is said that the fifth version of IPhone is going to be released in coming October, 2012 A.D. This new IPhone 5 will work in the 4G networks.