Maria Montessori was born on August 31, 1870 in Chiaravalle (Ancona), Italy. Her father was Alessandro Montessori and mother Renilde Stoppani. She was a successful physician, philosopher, educator and a humanitarian. She is the lady who had revolutionized education system especially in child age. She is the founder of Montessori Method of education. 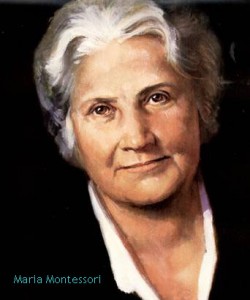 Maria Montessori’s father Alessandro Montessori had conservative and tempered behavior and her mother, Renilde Stoppani, was eight years younger than her husband. Her mother was well educated woman. Maria was a confident, optimistic and headstrong girl who was often at loggerheads with her parents who had trouble seeing eye to eye with their daughter’s radical ideas. Nevertheless, she was a girl who knew her responsibilities and spent a quarter of the day knitting and helping her mother with her chores. During her time, elementary education wasn’t given great consideration but Maria faired exceptionally well in her exams. She was heavily into sports too and was always viewed as the leader of the pack. She was very close to her father, but it was her mother who inspired her dreams and ambitions and helped her achieve everything in life.

Maria was a strong headed girl who was determined to give wings to her aspirations. At the tender age of thirteen, she took her first big step towards her ambition and got enrolled in an all-boy technical school to study engineering. In the year 1886, she graduated from the school by topping her class that year. She moved on to study modern languages and natural sciences after that year. She moved on to study modern languages and natural sciences after that, in the Regio Institute Tecnio Leonardo da Vinci from 1886 to 1890 where she realized that her real calling was medicine. Her family was shocked at her decision and her father, Alessandro Montessori vehemently urged her to change her mind. In those days, it was literally unthinkable of a woman to take up medical profession in Italy. Nevertheless, strong willed as she was, she opposed the decision of her parents and joined the University of Rome La Sapienza Medical School only to create history by emerging as the first Italian women to graduate in medicine. The honor didn’t come easy to her for she had to struggle her way to get and admission and it was only Pope Leo XIII’s recommendation that bagged her place in the university. She earned the degree of doctor of medicine in the year 1896 after she bowled over a panel of ten experts with her impressive thesis.

matter and she ended up educating herself to the works of two Frenchmen, Jean Itrad and Edouard Seguin who believed that even the mentally challenged people could be educated. She also exposed herself to the teachings of Friedrich Froebel, Rousseau and Pestolozzi. Inspired by their didacticses, she fought for the development of training of teachers and conceived her first principle that was to change the face of education later – first the education of the senses, the education of the intellect.

Maria got the opportunity of her life when she got the chance to address an educational Congress in Turin in 1898. The Italian Minister who attended the lecture was highly impressed with her arguments and appointed her as the director of the Scuola Ortofrencia, an institution devoted to the care and education of the mentally challenged. Maria accepted the offer and went on with her efforts to teach the mentally challenged. She devised exercises to equip her student with skills of reading and writing. She inspired all her 8 years old mentally challenged students to appear for the state examination and they wrote history by scoring above-average marks. This achievement of Maria stood out as “the First Montessorian Miracle” and created grounds for her later achievements.

the slum children in the district of San Lorenzo in Rome. Maria readily gave up her job at the university and established a school of the 6th of January, 1907 and named it ‘Casa dei Bambini’ meaning children’s house that had sixty students initially. There she got a chance to be up close and personal with the children that initiated her scientific observation and inspired her to come up with her philosophy. She discovered that children teach themselves, a simple yet intense observation that exhorted Maria Montessori’s lifelong pursuit of educational reform methodology, psychology, teaching and teacher’s training, all based on her dedication to furthering the self-creating process of the child.

In 1907, Maria Montessori moved to Rome to establish her first school there. By the year 1917, she had caught the interest of many education reformists and enthusiasts who saw promise in her philosophy. Nevertheless the interest waned after the publication of a small booklet entitled “The Montessori System Examined” by William Heard Kilpatrick.

A physician, philosopher, educator and a humanitarian, Maria Montessori was a prodigious lady of surpassing abilities. In several ways, ahead of her time, Maria Montessori had a humble lineage to boast of but her life and accomplishments were no ordinary feat. Her revolutionizing educational stance – first the education of the senses, then the education of the intellect – still finds a favor with modern day educationists.

Maria Montessori died in e Noordwijk aan Zee in Holland in 1952 at the age of eighty – one. Dr. Maria Montessori left us but her work continues to lives on through the Association Montessori Internationale (AMI), the organization founded by her in Amsterdam, Netherlands, in 1929.